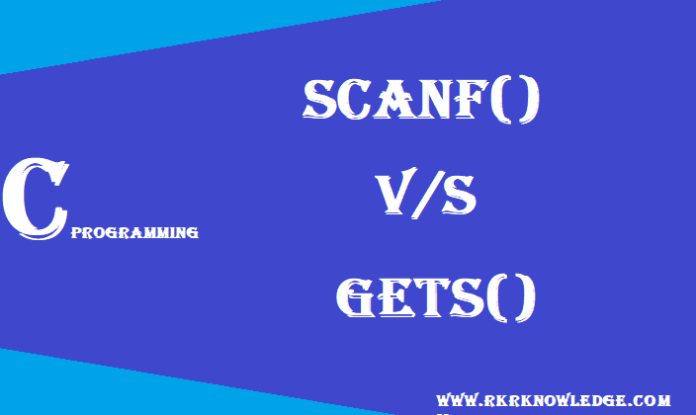 Then let’s start from what is the scanf() function in C Programming?

so I tell you, friends,

actually, The scanf() function is an inbuilt library function in the C programming language that is available by default in the C library.

To use the scanf() function in c programming you have to compulsory include a header file in your C program. Because this function and related macros are declared in the header file.

As you can see in the above program,

I have taken a variable named “a” and to take the value of “a” from the keyboard I used the scanf() function.

A function named gets() has been provided in the C Library to meet the shortfall of the scanf() function.

Using this function, we can input the desired length String into any Array_Identifier. This function terminates when we press the Enter key of the keyboard after inputting the string.

Example Of gets() function

we have to give the name of the array in which we want to store the string inside the brackets.

you can see I highlighted the line in which I gave the name of the array in the gets() function.

So till now, you all have seen what is scanf() function and gets() function now let’s see the difference between scanf and gets.

The first difference is that whenever we use the scanf() function to read the value from the keyboard. It stops the reading from the console when it gets the whitespace and new line in the value.

On the other hand, whenever we use the gets() function to read the value from the keyboard it won’t stop the reading when it will get the whitespace.

Because it considers the whitespace as a string. It only stops reading when it will get the new line in the value.

Some Other Input Methods in C

This function also works the same way as getchar() does, but the character inputted in this function is not visible on the screen while inputting.

We can also use this function when we want to get the password from the user because the password is never appearing while inputting on the screen.

What Is getchar() in c

getchar is a library function of the standard input/output <stdio.h> header file, so #include<stdio.h> preprocessor is necessary.

fgets() : – This is a function of File Handling. This Function comes under <stdio.h> header file. Here fgets means to read the string of the file.

I hope you all will be understood that what is scanf() and gets() or what is the difference between them in c. If you have any queries and suggestions regarding this topic you can ask us by commenting on the comments section.Thank you for visiting RKR Knowledge keep visiting and stay safe.

You can also read